You are here: Home / Holidays, Dining, & Entertaining / Dining / Elbows On the Table, Have the Manners Changed? Yes! 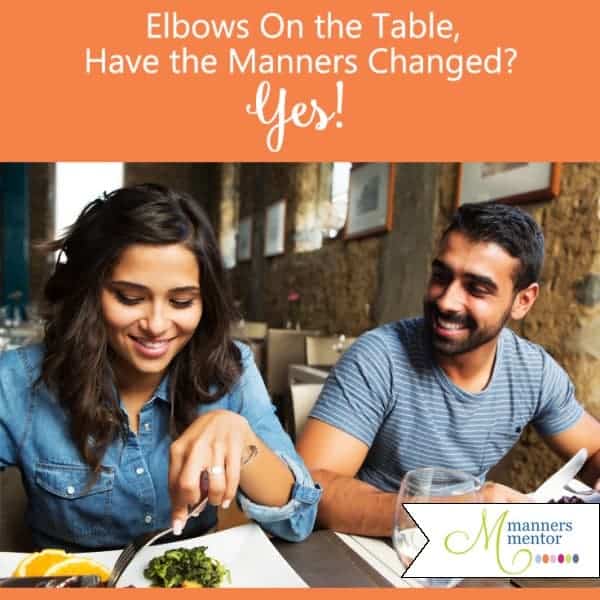 Elbows on The Table, Have the Manners Changed? Yep!

This question came from a notecard during Q & A Time at an event where I was speaking. The question is short and sweet. But the topic of having our elbows on the table and knowing whether what our moms taught us when we were little is still relevant today is a great one!

Question: “Lovin’ this talk! Do the rules about never putting your elbows on the table still apply? I tell my teens not to do it, but honestly, I do it all the time. I guess it’s “Do as I say…” in my house. (LOL!)”

Manners aren’t set in stone; they’re written in sand. They evolve with the times to meet our needs and sensibilities. We’re less formal now than back in our grandmother’s time. Strictly speaking, still today, our elbows don’t belong on the table. Only things used for eating go on the table.

Plus, when your elbows are off the table, you’re sitting up straighter. Research has shown again and again that the taller you sit (or stand), the more people pay attention to you and place additional authority and value into what you’re saying. That’s because upright posture in body language translates to, “I know what I’m talking about.”

And that’s not to mention that it’s easier to accidentally bump things and send them sailing across the table or crashing to the ground when our elbows are on the table.

Knowing all of this, I encourage you to keep your elbows off the table, and have your children and teens follow your lead.

Children love absolutes. They find security and certainty in them. (So do adults.)

If you tell children they can put their elbows on the table sometimes, if you’re a parent, you know exactly what’s going to happen!

Their elbows will always be on the table.

They won’t hear the part where you add, “but they can be only be on the table when….” 🙂

The Modern Manners Compromise for Elbows On the Table

So then, has anything changed?

Research into body language has also taught us that the more we lean towards people while they’re speaking, the more it’s evident to them that we’re interested in what they’re saying. While sitting at a table, if you want to lean in, your elbows are going to need to be on the table.

So we’ve made an optional compromise. Anytime there is no food in front of you, you may put your elbows on the table. This would include:

~ Before the first course is served

Again, it’s fine (and still correct) to not put your elbows on the table at all, and if you’re the type of person who likes things done one way and one way only, there’s no need for you to change what you’ve been doing your whole life.

However, if you want to lean in to the other person now and then throughout the meal when there’s no food in front of you — go for it!

To make those you’re with comfortable, watch what they do and then mirror them. If their elbows never touch the table, keep yours on your lap. In this case, you’ll form a better connection by matching them than you will by leaning in towards them.

OK — did you guess? Now I’ll let you know whether your guess was correct. (You didn’t really think I wouldn’t have to tell you, did you?)

My mentoring is that it’s best to keep your elbows OFF the table, just like your mom taught you! And if you have children, it will be a lot easier on you and them if they only have to learn one manner concerning their elbows: they don’t belong on dining tables. 🙂

Keep doing what only you can do! Bless your corner of the world by being the best version of you!