Ma’am and sir are words of respect used everywhere English is used. Should we continue to use these “honorifics” today? It’s my honor to assure you that yes ma’am, we surely should! 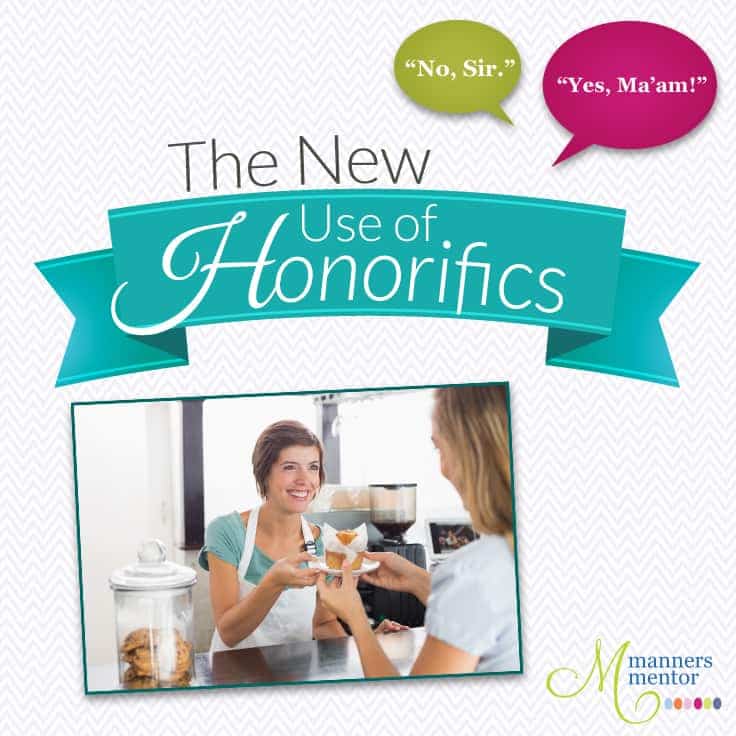 “I’ll be waiting to pick you up!” I assured Marc. “I’ll be standing right here when you get out!”

He shifted his backpack, gave me a nervous smile, and said, “Yes, ma’am. I’ll be glad to see you!”

It was the first day of a new school year and my oldest son’s first day ever at his former home-school co-op. Nervously, he pushed open the heavy door to the auditorium where all the students gathered for first class. Then the freshly painted metal door shut hard behind him, separating me from my boy.

He knew no one, and, being shy, he was especially anxious.

Knowing that, Mrs. Davidson, Marc’s history teacher that year, made a special point to welcome him. As class began, she went around the room welcoming each student back by name and engaging each in a cordial discussion about summer.

Marc was the third or fourth student she welcomed.

With a genuine smile, the teacher introduced herself. “Hello, Marc! I’m Mrs. Davidson (not her real name). You’re the only new student in this class. I bet you haven’t had a chance to meet anyone yet, so we’ll introduce ourselves. I’ll go first. Then we’ll go around the room, and everyone can tell Marc anything they want about themselves. Why don’t you go last, Marc; that way you’ll already know something about everyone else!”

Marc exhaled. His first day jitters began to subside because of the kindness of his new teacher to include him.

“Thank you, ma’am!” he replied, expressing his gratitude mixed with relief.

In an instant, the teacher’s smile disappeared, replaced by a look of indignation. His classmates’ eyes darted knowing glances at one another, and their posture changed from relaxed to rigid. It was obvious they knew what tripwire Marc had accidentally set off.

In that moment, Marc was desperately trying to figure out what everyone else seemed to know already.

His answer came with the jolt of a rear-end collision.

Wrong Conclusions Can Lead to Confusion

“Marc McKee,” the teacher stated tersely. “You’re new here, so I will allow you this one offense. Do not call me ‘ma’am‘ again; I find it offensive. You are to call me ‘Mrs. Davidson’ and only ‘Mrs. Davidson.’ Do you understand?”

Afraid to say anything for fear he would say the wrong thing, Marc shook his head yes. Finally, he muttered, “Yes, Mrs. Davidson. I apologize.”

Marc felt shaken and beyond embarrassed, but, as things often do, it actually worked out for good. After class, and throughout the following day, he bonded with other students who were in the room (or had heard what happened from those who were) as they shared their tales of being reprimanded for the same thing.

As one older student wisely pointed out, “If she’s going to expect us to know and use a rule that’s not correct, she should post a big sign on her classroom wall.”

When Marc told me the story on the way home from school, he added, “I’m never calling anyone ma’am again in case some other lady gets upset.”

He was eleven years old. I had worked with him since birth to get words of respect to roll off his tongue as an expression of his heart, and they finally did. However, this one woman’s actions were about to scare him from doing what so many other people had appreciated and even been astonished over.

It was everything I could do to not call her on the phone and say, “Good afternoon, ma’am. If you have a minute, I’d like to discuss a situation that I believe happened in your class today, ma’am.”

That would have been little of me.

However, true confession: I did daydream about it. I’m still a work in progress — with miles to go.

Most people don’t become indignant when someone does them the honor of calling them by an honorific. However, for those who do, it’s usually because they’re confused about the heritage of the words or their contemporary use.

So let’s take a look and see what the gold standard of usage is for our children and for us when it comes to calling others “sir” or “ma’am“!

An Important But Short, Short History of Sir and Ma’am

To know why we use a word today, it’s good to know how it originated. There are many lengthy online articles on the history of these words. However, for the sake of this post, we’ll go with the most commonly agreed upon usage. Our purpose here is simply to tie the origin to how it applies to our families and to us.

• Sir first appeared as sire in the 1200s. Since about that time in Britain, it’s been a form of address for knights and baronets. Baronets rank below barons and even include commoners of note.

• Ma’am is a contraction-of-sorts of madam (the ‘d’ is simply removed). It’s an Anglo-French word first in use in the 1300s and was originally ma dame — the literal translation being my lady. This referred to any lady, married or single, just like sir referred to any man. Both words have been in standard use in their current forms since at least the 1700s. Today, they are still standard signs of respect.

• Madam (with the ‘d’ in place) still has some use in the U.S. Most commonly, this honorific is for high-ranking female government officials whom we should address as Madam, especially in conversation: Madam Secretary (female secretaries of state, treasury, education and such) and Madam Justice (female justices of the Supreme Court).

What the Words Are and Aren’t

• Sir and ma’am are not age-related. Once you’re old enough to have the right to vote or serve in the military (age 18), you’re old enough for others to refer to as sir or ma’am. So don’t feel like you’re too young for people to call you by these honorifics. If they apply to an 18-year-old, they can’t possibly be just for “old people.”

• On a side note, please don’t let your own age offend you. Embrace it! It’s a numerical fact, not a judgment about your looks, capabilities, physical strengths, mental agility or anything else. And it greatly beats the alternative of being dead. Amen? Amen!

• Will you hear sir and ma’am used mostly in the South? A generation or two ago, yes. Today, TV and movies are lessening our regional accents and traditions, and we’re slowly becoming a nation of oneness. In the case of sir and ma’am, it is as appropriate in the northern, eastern and western parts of the country as it is in the South. It’s not so much about location, it’s just polite — respectful adults using the words and mindful parents teaching their children to do the same. Good manners aren’t set within certain state borders. Both sets of my northern grandparents taught them to my parents, and my northern parents then taught them to my brothers and me.

• Another reason why the use of sir and ma’am is not limited to the South is because they’re in such widespread use in the military and in police and fire departments across the nation. These honorifics become a habit for these fine men and women, and they then use them in their conversations with others, whether they’re in or out of uniform.

• The word origins of sir and ma’am show that, unlike some suggest, the words aren’t slang for anything derogatory. And if they ever were, it would have been by small groups of small-minded persons. Today, society values the terms traditionally, commercially, and culturally as a sign of respect to all.

Should We Teach These Words to Our Children?

Why Should We Teach Our Children to Say Sir and Ma’am?

For the same reason you and I should say them: the words are verbal signs of respect. Respect is so important to emphasize to our children because it’s the cornerstone of other invaluable character traits such as tolerance, selflessness, giving, and compassion.

In the midst of a world of disregard and disrespect, they set our children (and us) apart.

While it’s often said that opposites attract, that’s not true at the deepest level. The core values of people must be similar for them to form meaningful bonds. When our manner of being and how we interact with others reflect those quality character traits, we attract like-minded people. And aren’t those the people, in regards to respect and kindness, we wish and pray to have surround our children (and ourselves) throughout life? These truly are skills that have a value that will last a lifetime.

In the video below from KidsInTheHouse.com, the world’s largest parenting video blog, parenting expert D’Lynda Kaplan shares with us why teaching positive character traits such as saying “Yes, sir” and “No, ma’am” are important in raising children with good values.

Do you say sir and ma’am when speaking to others? Are you teaching (or did you teach) your children to use these honorifics? Growing up, were they expected to be used in your home? Let’s chat! The conversation is in the comments under this post on the Manners Mentor Facebook page. Click here and come on over and join us on my Facebook page!

Please Like, Share, Tweet, Pin or email this post to your friends, family and those in your social media circles. Join me and be part of The Manners Mentor Movement to make manners a meaningful part of our public dialogue again! In fact, let’s not get people just to talk about them; let’s lead by example and get them to use manners and respect as the “how” of living out the Golden Rule! (More on this in the coming weeks!)

Thank you for reading this, dear sir or ma’am!

PS: Mrs. Davidson turned out to be one of Marc’s favorite teachers! 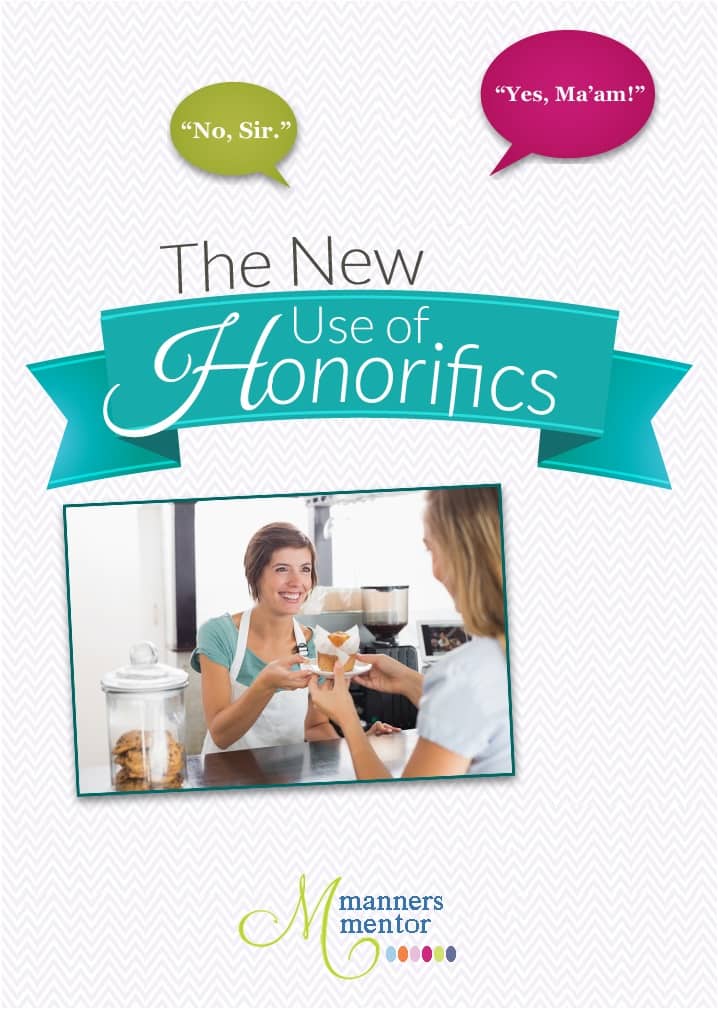