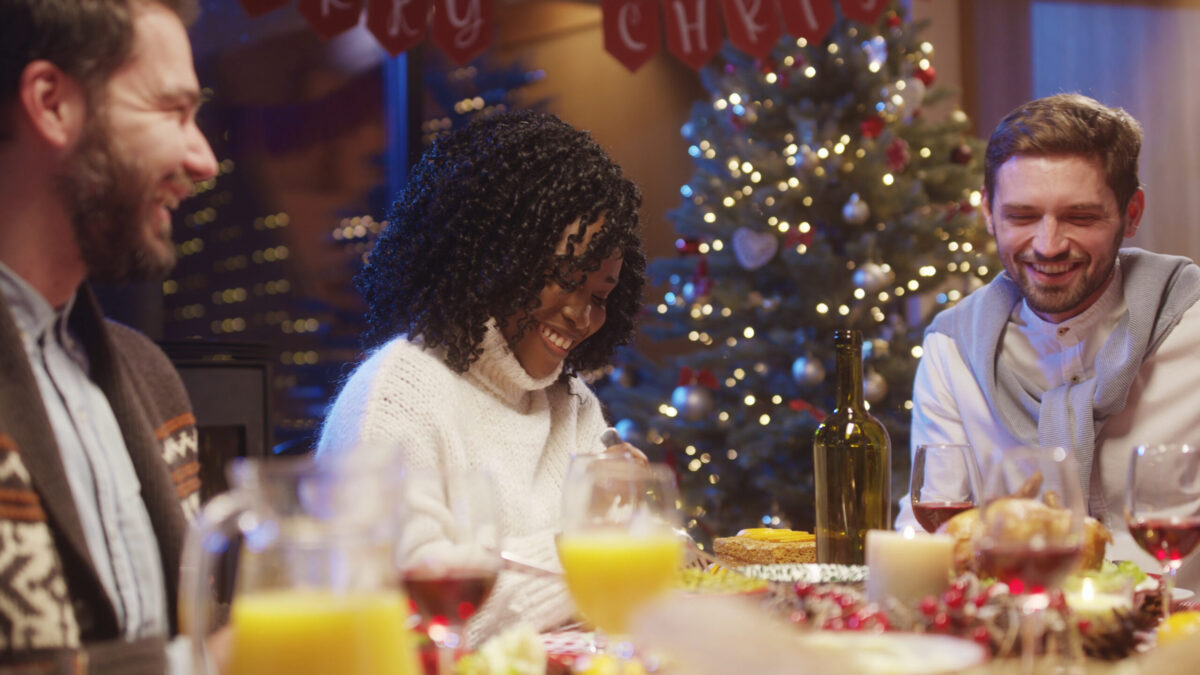 Whether you have ten parties on your calendar or just one or two, Christmas is in full swing, and now’s the time you’re meeting and mingling with new people: friends of family members, friends of friends at social gatherings, and people important to your career success and the company, product, or organization you represent. If you haven’t read the post 5 Things NOT to Say at a Christmas Party, or Any Party, now’s a great time to do so, because this post builds on it.

Now that you know how to avoid stepping out on the wrong foot, let’s find out the best way to start conversations that leave others with a great opinion of you, that keep the door open for future conversations, and that help you exchange any conversation self-doubt (which is oh so common) for self-confidence in your ability to be at ease while imparting the gift of putting those you’re talking with at ease, too.

When you’re having a conversation with someone and the two of you find yourselves saying “So am I!”, or something similar to it, you know you’re hitting home runs straight to that person’s heart.

The ability to find commonalities with others will win you more friends and admirers than just about anything else you do.

Someone casually says, “I binge-watched that TV series.”

You’ve just hit on a point of connection that will propel your conversation further. And a person goes from stranger to acquaintance by layering on one connection point after another.

Here are five great ways to start conversations that will help you quickly find your way to multiple connection points!

I know, I know, almost everyone already knows this one, but I had to include it. And I listed it first because it’s just naturally the best way to get the conversation started.

Why? Because it’s the one thing that you already know you have in common: you both know the host(s). It’s a connection point wrapped up with a bow and placed in your hands.

It also opens the door to numerous other conversation topics. If they went to high school or college together, you can ask about school. If they attend the same church, you can find out about church. If they work at the same company, you can inquire about work. If their daughters take dance class together, you can ask to hear all about dance class and their daughters. See! Easy peasy. That’s why this one is a classic.

2. Where are you from originally?

People are almost always happy to talk about their hometown!

Don’t mention that they sound like they have an accent — Southern, Boston, Minnesota, British — because it draws attention to a difference the two of you have.

Differences are fine in already-developed friendships, but not in first meetings.

When you’ve both shared where you’re from, you can now talk about anyone you know who’s also from the same place or nearby. “My sister-in-law is also from a suburb of Chicago!” or “You’re from a town of fewer than 5000 people? So am I!”

Grace Note: Some people ask instead, “What brought you to our city?” The downside of this question is that sometimes the answer isn’t a pleasant one. They could have moved due to divorce, a death in the family, to take care of a seriously ill relative, a job loss, or such. If they’ve moved to your current town for a reason they want to share, nine times out of ten they’ll bring it up in conversation: “…then we moved to Atlanta in 2018 when Devon took her current job.”

3.  What are your holiday plans?

Whether the other person is planning a low-key, stay-at-home Christmas and New Year’s Eve or flying off to someplace exotic, you can share your plans with each other. And also share about a past holiday period where you’ve enjoyed the same kind of holiday season they’re planning for this year.

4. Do you have any special holiday traditions?

This is better than asking about their holiday plans because while one person might be flying off to Barbados the day after Christmas for a week-long vacation, the other person might be right back to work the next day. It’s not going to be a connection point for the two people.

However, almost everyone has something special they do each holiday season. It might be baking cookies, reading stories each night by the Christmas tree, driving through local neighborhoods to enjoy the Christmas lights, building a gingerbread house, or hosting a New Year’s Eve get-together. It’s in talking about our traditions that we’re more likely to touch on a meaningful connection point.

Asking a question like this allows people to include something that may have happened just last year. And this way, even if they had a difficult childhood, or they’ve suffered loss at Christmas, or anything else, they can focus on what stands out as a favorite memory.

It’s a science-backed fact that when you get people to recall good memories, they transfer that good feeling onto their impression of you!

Words shape lives. Through them we make ourselves known to others. The words we choose to say shape our hearts and character, over time. When we use the Gold Standard we talked about in last week’s post as our everyday standard, we’ll find ourselves changing — not into something different than we are, but into who we were always meant to be. You’ll become you at your best! And as you do, all those who come into contact with you will be better for it, too.