You are here: Home / Business & Technology / Business Calls / Five Things to Do When Someone is Paying Attention to Their Cell Instead of You

When people are addicted to their cell phones, whether it’s a real addiction or still at the point where it’s a bad habit, meaningful interaction with them is almost impossible. So the next time you’re with one or more people who are paying more attention to their phones than they are to you, here are 5 things you can do to help put their focus back on you and the situation or conversation at hand. 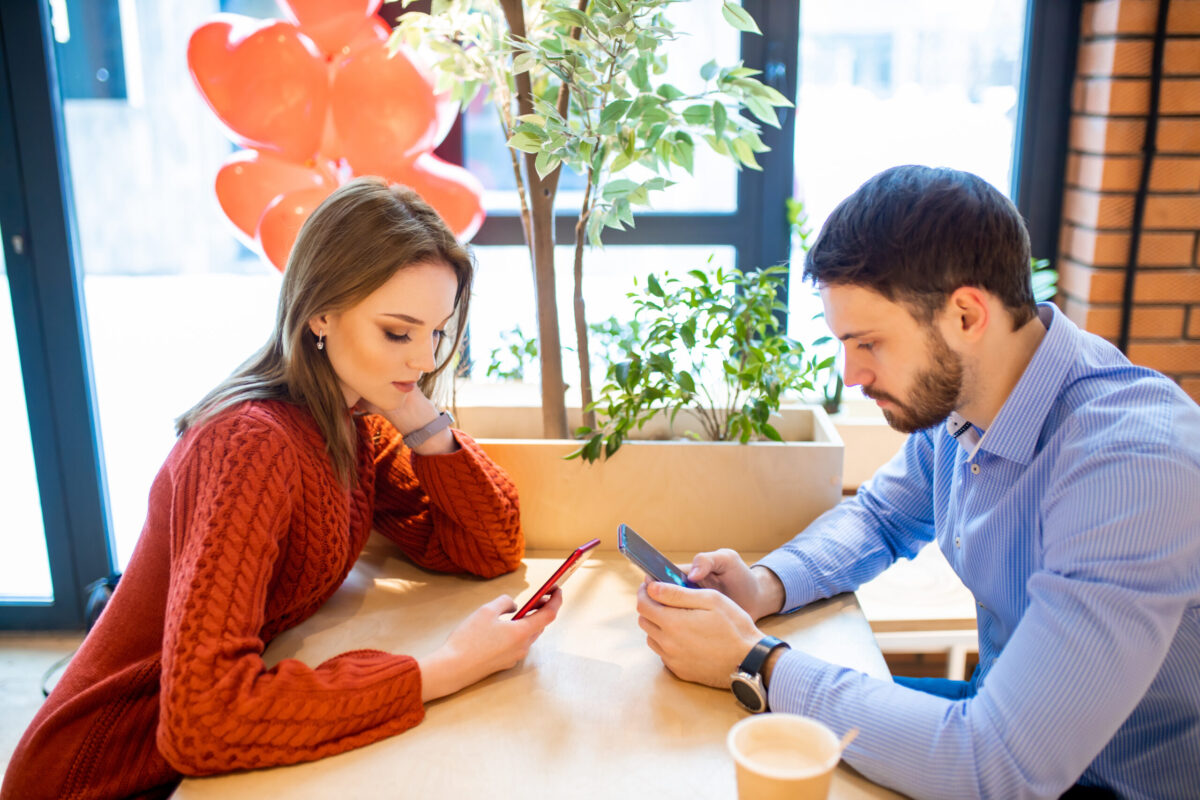 The awkward first-date nerves of the couple on the reality TV show were apparent. Their conversation was slow as they thought hard of the next thing to say. They discussed the menu for a loooong time. The man sheepishly complimented his date on her dress. She refuted his compliment with some form of “This old thing!”

It was hard to watch, and I was about to turn the channel when the man’s cell phone beside him on the table began to vibrate. After a moment, his ringtone of Adam Levine and Maroon 5’s Moves Like Jagger began loudly as he fumbled to turn off the phone.

“No, answer it,” his date said. “It’s the right thing to do,” she reassured him.

He answered his phone.

She sat there trying not to overhear the one-sided conversation (with another woman) of the man just 18 inches from her.

I turned off the TV.

Welcome to the second decade of the 21st Century, where the two reality TV stars aren’t alone in their misunderstanding of the hierarchy of cell phones and people with us in person.

Let’s admit there’s a problem with the amount of attention some people give their phones. (That’s the first step in fixing it.) Next, I’ll share five manners for what you can do and say when someone ignores you for the person or (worse yet) the text or app on their phone.

However, some are standing on a precipice. The longer they stand there, the more likely it is that they’re going to fall. In this article from the Psychology Today website Are You Addicted to Your Cell Phone?, the case is made that, while not an addiction, it’s a distraction that often prevents the person from being present in the moment.

“Cell phones are addictive in the same way slot machines are addictive. The immediacy of response, gratification, and excitation combine to make the user want more and more now.”

Mom and Dad, We Could Be Harming Our Children?

International Business Times published Cell Phone Addiction: Parent’s Glued to Smartphones Have “More Negative Interactions” With Their Kids. That study’s findings are shocking. Every parent should read this article. But be warned, it’s sad.

I want to cry over the following statistics.

In a study conducted where parents were watched eating with their children at a fast food restaurant, one-third of the parents continuously were glued to their devices. 73 percent checked their smartphone at least once.

Those involved with their devices tended to negatively interact and harshly scold their children. One mom kicked her child under the table as the girl tapped on her mom to try and get her attention. Another mom ignored her child as he tried to lift her head with his little hand to gain her attention.

Some parents are allowing connecting with others to negatively alter their parent-child bond and their child’s social emotional development. This stuff is really happening, folks, and we need to be diligent that we don’t turn “Just this one time — this call is important” into our norm. The slope is icy slick. You can fall before you even notice the ice.

It’s obvious from the articles above that the situation is so widespread that we all know one or more people who have a problem separating themselves from their device. So what can you do when they pay attention to their cell phone instead of you, and how can you safeguard yourself and those you love from becoming “that” person?

Your world begins at your front door. In your home, establish rules for device usage even (and especially) if this means that as the parent you’ll be the first one changing your ways. Since it’s easier to keep away from your phone when it’s away from you, establish physical distance between yourself and the device. It’s soooo tempting to “look just this once” when the phone rings, vibrates, or chimes, that it’s less tempting if we keep a good distance.

2. Send An Unspoken Message Through Your Actions

When you’re with someone, noticeably take out your phone, turn it off, and put it away. That sends the signal that you’re going to be tuning in to the person (who we hope will follow suit). (When you are sending a text, here are 7 Ways to Text with Graciousness and Savvy.)

3. If Your Phone Makes Sounds, Apologize

If you forget to turn your phone off and it makes any sound, then without reading what it says, turn your phone off, and apologize. Try something like, “I’m sorry for my phone disturbing us. I know that’s rude.” In this way, you did the right thing and sent a message to the other person(s) of the right thing to do. (For more etiquette guidelines for using your phone, check out Your Savvy Guide to Smartphone Manners.)

4. If Someone Is Occupied on the Phone, Offer to Leave Until the Person Is Finished

Whether you’re at your friend’s home, a business meeting, or out on the town, if those you’re with are wrapped up in their phone, offer to leave them alone until they’re done. You can say in a low voice, “I feel like I’m invading your privacy. I’ll go to the restroom while you finish.” Then get up and leave without giving them time to respond. By the time you return, they’ll probably be putting their phone away. If not, tell them you can see that they’re caught up in other things and that maybe you should reschedule for when they don’t have to divide their time.

5. Explain to Them How Their Actions Are Making You Feel

There comes a time when people need to know that you have boundaries and that they’ve just stepped on them. This isn’t being rude (if you say it nicely), it’s letting them know that their behavior isn’t the type you choose to be around. “Jasmine, we planned this lunch weeks ago. I arranged my time to be here because you’re important to me. I would have more of your attention if I had just called or texted. Can we make the rest of our time together device-free, or should we reschedule?” Accept their apologies but not their excuses. If they offer an excuse (“I’m waiting on a call from the company that’s coming out to install my new garage door today”), say, “I wish you would have told me. I would have rescheduled.” You can find more tips to make sure you’re the master of your phone and it’s not the other way around in How to Avoid the 7 Most Common Cell Phone Sins.

Medical doctors on call get a pass, and expecting dads whose wives might go into labor at any moment get free passes, too!

For the rest of us, if we have something pending that is going to cause us to check our phones, it’s only polite to let the other person(s) know in advance so that they can reschedule if they choose.

Someone wants your attention. That’s a compliment! And if you’ve set up or accepted an invitation, it’s inherent in your being there that you need to be giving the other person the gift that no one else can give: the gift of YOUR attention. It’s wanted, needed, valuable, and priceless!!! 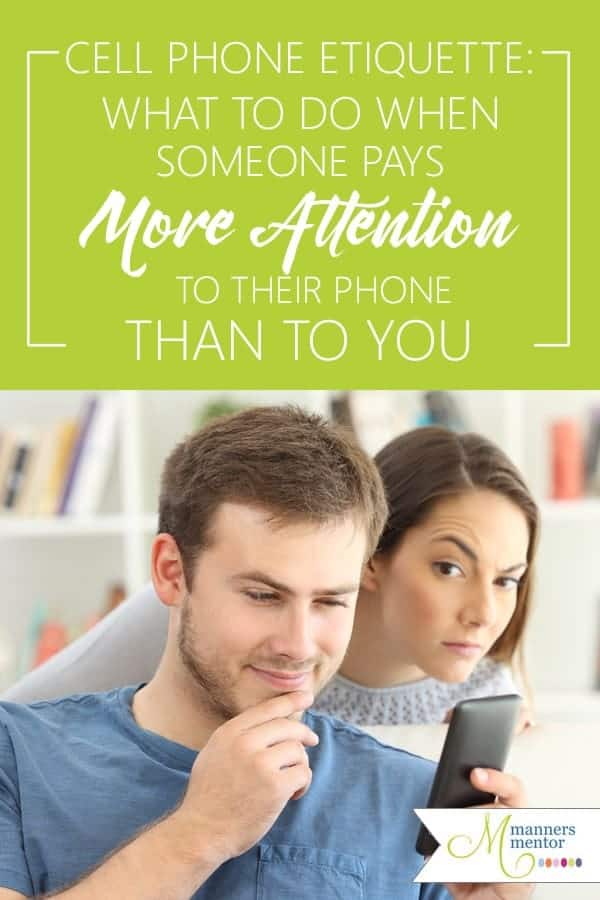