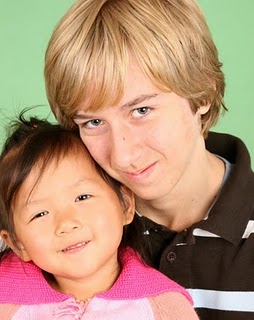 The McKee baby-making factory is out of business. I’d love to have another child, but after two babies, two miscarriages, and my youngest son’s dangerous birth and learning disabilities, Kent and I decided that if God leads us to add to our family, (I hope He does!) it will be through adoption.

Thinking about adoption has me talking to adoptive parents. And these parents, when they find out I write about etiquette have asked me to please share this information with anyone who will read it.

It seems that too often people speak before thinking when it comes to questions and remarks about adoptive and “real” children and their adoptive and “real” parents, or why one or more members of the family look a certain way or have a particular disability.

“Inquiring minds want to know!” use to be the tagline of the grocery store checkout line paper “The National Enquirer” known for its gossip, half-truths, and highlighting the unflattering in any situation. Adoptive parents have shared

It’s about being sensitive to adoptive families by avoiding questions we might find simply interesting, but they find intrusive at best, and often hurtful.

In our next post, we’ll look at adoption etiquette as it relates to announcements, parties, and showers, and how adoptive parents can respond to those insensitive questions.

1. The way an adoptive child entered a family, or why a family chose to adopt a particular child, is no more open to discussion than how your birth child entered your family. Can you imagine a stranger in line behind you at Target noticing your child and then asking without hesitation, “She’s so cute! So, how did she come about? Have a fight with your husband and make up?” Or “Get lost in the moment and forget your birth control?” I can’t imagine that would ever happen; at least let’s hope not.

Yet adoptive parents are bombarded with insensitive questions about how their child came to them and often in front of young children old enough to realize that strangers find their family “different” than other parents and children. “Where’s her real mom?” “How much did she cost?” “Couldn’t you have your own child?” “Why didn’t you adopt an American baby?”

We don’t live our lives on Oprah’s TV stage. Adoptive families aren’t any different. They shouldn’t be thought of as eager to take up residence there and tell their stories to everyone who asks. Some (probably a lot of) adoptive parents are eager ambassadors for adoption; yet on their schedules — not at the beck and call of strangers.

2. Different families tell their children their adoption stories at different ages. In the case of people adopting children of the same race, keep in mind that some children might not know they’re adopted. While you might disagree with children not knowing, it’s the parents’ decision.

And sometimes, younger siblings might not realize older siblings are adopted. Ask the parents privately before speaking openly to the children.

3. The adoptive mom and dad are the child’s real parents. Choose words that are sensitive to the subject, and don’t put a layer of separation between parent and child. One adoptive mom I interviewed when writing this post put it this way: “Real is not a good word. All the people in the adoption triangle are real. When someone uses that word for the birth parents, it makes the adoptive parents sound inferior. It can be especially harmful if adopted children or their siblings hear it. Use ‘adoptive mother’ and ‘birth father,’ etc., to distinguish individuals if there’s ever a reason to mention everyone.”

4. Don’t share adoption horror stories with parents who have adopted or are in the process of doing so. That’s the same as telling a pregnant woman about your 27 hours of hard labor. What good is done by it? Yes, sometimes children go astray as they grow up (whether raised by their birth parents or adopted parents), and an adopted child raised in the best of homes can turn out to have the same struggles of her birth parents 20 years earlier. However, for every story like that, there’s an inspirational story of destinies changed due to adoption.

Keep in mind, as Christians we’re all adopted into Christ’s family. What if He let our possible weaknesses and those of our parents decide while we were still children whether He would ever call us His own?

Join me soon for Part Two.

Until then, are you a member of our Facebook family? You’ve gotta come join the fun!

We have almost 2000 members. They’re the nicest people you’d ever want to be with! Come on over to www.facebook.com/manners.mentor to keep in the loop and get your daily dose of our Manners Mentor Family tips, inspiration, and fun!