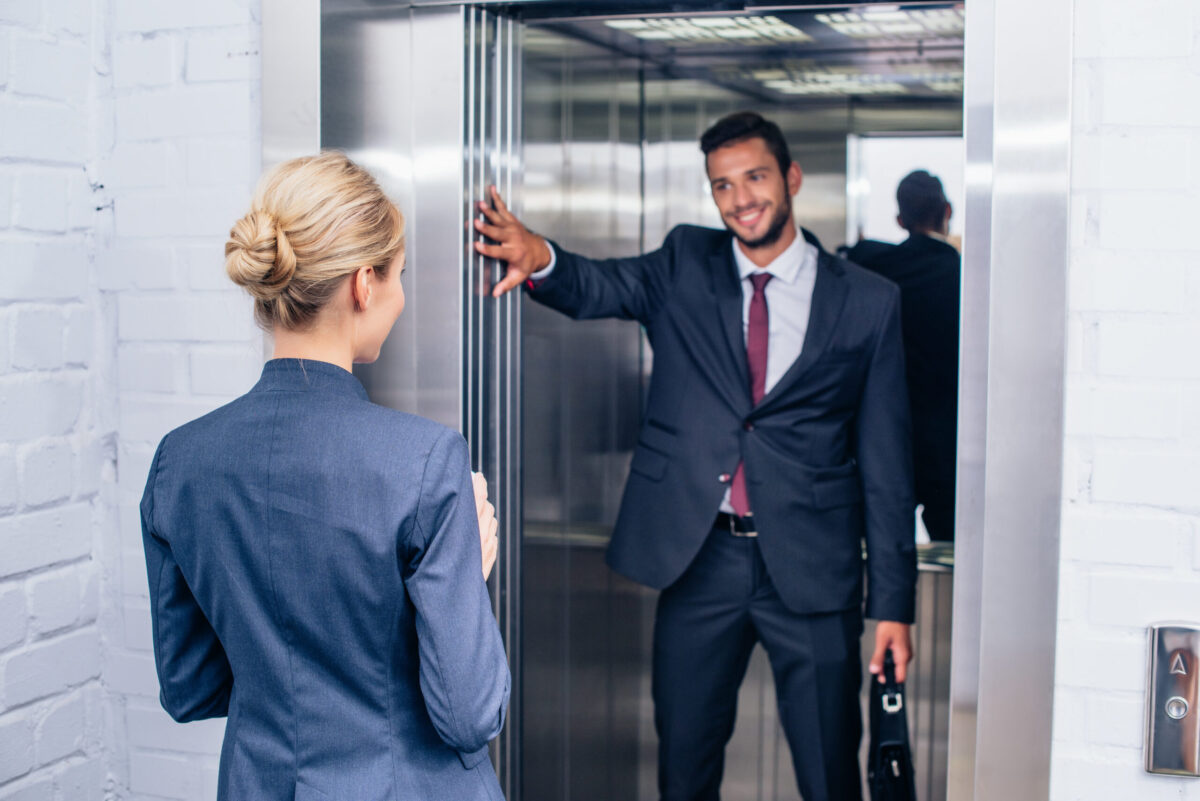 Wow! It’s hard to imagine, but every weekday in the U.S., according to Today.com, there are approximately 120 billion elevator rides. That’s a lot of up and down! And for some, especially those working in high-rise office buildings, the minutes each day they spend in that small box can be the most nerve-racking of the day.

It’s not only the people who suffer from claustrophobia and those who have a fear of elevators, but a whole lot of us wish we could magically transport ourselves to our given floor without the need of the ascending and descending box.

As Americans, we like a bubble of space around us (three or four feet from strangers). But in some other countries, even sardine-spaced distances of only one foot don’t make elevator riders count the seconds till the door opens.

For a long time now, people have talked about the “unwritten rules of elevator etiquette.” However, I don’t think everyone (anyone?) got the memo — have you ever noticed the strange behavior that takes place on elevators?

Confusion about: the difference between entering and exiting crowded vs. uncrowded elevators; what to do when you’re carrying a large box or bag; whether just to say hello or to go further and make pleasant small talk; and whether it’s best to stay quiet, not smile, and look only straight ahead as if you were alone.

It’s time to take those unwritten rules of elevator politeness, write them down, and send out the memo.

But why have a written standard?

Knowing what to do gives us confidence, and once we’re confident, we’re so much more at ease. And being at ease is a great feeling!

So here it is, the written code of elevator manners (manners = how to handle things) so that we’re all on the same page about the best way to handle what to say and do on an elevator.

1. Where to stand when waiting: When waiting for the elevator to arrive, keep to your right (just like when driving) of the door. This leaves the whole left side and middle for those exiting. Make sure everyone is off before stepping on board. Knowing who goes first keeps people from accidentally bumping into each other.

2. Ladies first? Chivalry isn’t dead, it’s just sometimes different on an elevator. And different again depending on whether the elevator ride is work related or you’re riding up with your sweetie for a special date in the fancy restaurant on the 28th floor with a panoramic view of the city. Here’s the breakdown: At work, chivalry is gender-neutral (in most business cultures), so the person closest to the door enters or exits first. (In some business cultures, the higher-ranking person(s) on the elevator would exit first. Know your company’s culture and follow it.) But in all these cases, we’re talking about an uncrowded elevator. If an elevator is crowded, the person closest to the door exits first. For social occasions, ladies do enter and exit first and allow gentlemen to push the elevator buttons — again, on an uncrowded elevator.

3. Stepping off and then back on: When you enter an uncrowded elevator, step to the back and stand as close to the walls as possible to allow future riders an easier time getting on. The first four spaces on an elevator that should be filled are the four corners. As more people enter, they fill in the middle. When the elevator stops, if it’s crowded, a couple of people at the front should step off, even if it’s not their stop, and hold the door open with their hand(s) to allow the people from the back of the elevator time to exit before the door closes. Once everyone who wants to exit has done so, the people holding the door(s) reenter the elevator along with any newcomers. If you’re going to a high-level floor, try making your way to the back of the elevator, since most others will be getting off before you.

4. The button pusher: Otherwise known as “The Lord of the Buttons!” If you find yourself near the panel of buttons on the elevator, you have a job! It’s a job that’s a great way to gift your co-riders with thoughtfulness. So that people aren’t reaching over and around others, or forced to ask a stranger for a favor (“Do you mind pushing 7?”), your job is to be proactive. Hold the door-open button until everyone has exited and entered, even if someone is holding the door open. Your holding the door-open button is a second level of defense against the door trying to close on someone. As new riders enter, make eye contact, smile, and say, “Good morning! What floor, please?” Then simply push the button for your grateful co-rider. Some elevators have panels of buttons on both the right and the left sides. In that case, the person who is the more outgoing of the two persons closest to the buttons will probably just start asking (assuming that person got our memo and knows to do so!).

5. I’m stuck in the back of the elevator? Oh, and I’m carrying a large shopping bag, too. First, let’s tackle the topic of being stuck in the back. If you’re in the rear of a crowded elevator, and your floor is the next stop, say so as soon as the elevator begins moving again. “My floor is next” is all you need to say. This will let people know in advance that they’ll need to let you through so you can exit. (People love advance notice even in little things.) Now, about that large shopping bag full of the 75%-off, end-of-season clearance items you picked up while shopping on your lunch hour. First, good for you! Enjoy those clothes. Especially if they’re shoes. I find shoes hard to resist, harder still if they’re high-heel pumps with any type of buckle or bow. I saw this pair of leopard-print pumps with a modern bow the other day and….Oops…I digressed….back to large shopping bags. Hold the bag on or near the floor directly in front of your feet. Why? Because our feet and legs are much thinner than our upper bodies, so when the bag is carried low, there’s more space for it and it’s less in people’s way.

6. Niceness makes a nice difference: Please and thank you go a long way, even on a short elevator ride. Say these “Wonder Words” to people who: hold the door(s) or button for you, squeeze over to make room for you, move out of your way to let you exit, or anything else you can think of for which a please or thank you would put a breath of politeness and gratefulness in the air!

7. Can we chat?! This is a biggie. The people on the elevator with you are a trapped audience, so it’s nice to keep what we’re saying to a minimum. If you’re in the midst of a conversation when you enter the elevator and there’s anyone else on it, talk quietly or pause your conversation for the ride. If you’re on a cell phone before you enter, tell the person you’ll call right back as soon as you reach your floor (a lot of phones won’t pick up a signal in an elevator, so this is often a non-issue). If, by chance, your cell phone works on the elevator, then just like in the previous example, tell the person you’re about to step onto an elevator, and ask whether you can mute the conversation for a minute until you reach your floor. If you’re on a higher-level floor and the ride will take several minutes or longer, offer to call back. As you get on the elevator, it’s fine to say “Good morning” to everyone in general, and no one in particular. You can also smile and make eye contact, but keep the eye contact brief. A lot of people go into what I call the “alone zone” on elevators. They look straight ahead, at the floor, at the panel of buttons, or at whatever they might be holding in their hands — anything other than having to make eye contact. If your fellow rider(s) appear to be in the “alone zone,” it’s actually kinder of you to allow them to stay there, comfortably “hiding,” undisturbed in plain sight.

Hop over to the comments and add your elevator tips to the list, or share elevator stories with us. 🙂

I post only a few times per month, but I’m on Facebook daily. Make sure to join us there, or you’re missing half the fun! Also, tons of great Pins were added last week to my Pinterest boards. I think you’ll enjoy them. You can follow my boards at: Maralee McKee. I’d love to follow you back!

Join me for “Monday Morning Manners” next week. Our post will be, “The Top Ten Manners Your Child Needs NOW In Order to Grow Into a Liked and Respected Adult.”

Lastly, a million thank yous for the many, many new subscribers to the blog and followers on Facebook last week. It’s great to see our family growing, and so quickly, too! Until next Monday….

Maralee McKee is dedicated to helping you become the person you most want to be and to live a confident, kind, and generous life. She is a contemporary etiquette, manners, and people skill expert, and the founder of the prestigious Etiquette School of America. Her etiquette skills blog is the most read in the United States. Maralee presents business etiquette seminars to corporations world wide, coaches individuals one-on-one virtually and in-person, and offers monthly online mentoring for people who want to win at work, succeed socially, and love who they are and how they present themselves to the world. Her book on how moms can teach their children to become the best version of themselves (Harvest House Publishing) earned the prestigious Mom’s Choice Gold Award for excellence in parenting books. Maralee is a former TV and radio host, and has been quoted in the media hundreds of times.