Texting etiquette hasn’t reached the heights of the tsunami of texts we send every day because no other technological form of communication has caught on so quickly. It’s easy to see why many have become so smitten.

Texting is the 21st Century equivalent of passing a note in class!

It began with students who discovered that electronic notes are more direct and less anxiety-filled than tearing out a sheet of notebook paper, scribbling an “I’ve gotta tell you…” message, folding it securely, and hoping the teacher doesn’t catch you and that others don’t read your note on its way around the room to your BFF four rows to your left in pre-algebra.

Usually what’s popular with tweens and teens is passé to grownups. Not this time. We might have balked at our kids at first; now we’ve joined them. Those of us over 30 didn’t vote or even hold a town hall meeting, but either through agreement or acquiescence, we’ve joined in. (Do you remember the old Verizon commercial where the teens are getting on to mom and dad for texting? I included it here for you to take a look at.)

Of course, texting in itself isn’t bad or good. It’s in how we use it.

It’s kind of like a family of deer. Watching them graze leisurely in a meadow is a delight. Having them prancing full-throttle through your living room equals disaster.

I text, and I don’t plan to stop. Texting in a place where you’re not with anyone or not bothering anyone is fine. However, texting around others or as part of multi-tasking often causes harm.

Texting hurts in ways less obvious than car crashes (we’re 93% more likely to crash if texting while driving) and walking mishaps (a New-York-City-area teen fell into a manhole while texting and had to be hospitalized; luckily, she’s fine now). Texting hurts by depersonalizing our personal encounters. With every text message sent or received in the presence of others around the family table, the living room sofa, the boardroom, or the grocery store check-out lane, we’re separating our focus from the person in front of us.

Our attention is a gift.

Our full attention is the foundation of every kindhearted, other-centered interaction. Texting alters the continuity, focus, and momentum of our encounters.

It produces anxiety (mild to severe) in the people you’re texting in the presence of, and regardless of whether they’re telling you (or even aware of it themselves), they probably want to focus their attention on those who pay them back equally.

These are big matters.

If we’re not being careful, texting can hurt our family, our friendships, our business relationships, even our ability to govern.

A while back, a ruckus in the New York Senate halted agendas because one senator was angry at another for fiddling with his smart phone throughout a meeting.

A Yahoo Hot Jobs poll of 5300 people found that 33% of associates admit to texting regularly during meetings. (If 33% admit to it, how many do you think really are doing it? Lot’s more, for sure.)

Enjoy one another when riding to school.

I’ll never forget my surprise a few years ago when I was teaching a second-grade class on car manners. When the lesson turned to riding to and from school, the children stunned me. One little guy stated, “Mrs. McKee, I don’t talk to my mom on the way home from school. She talks to her friends on her phone. I just play my video games.” One after another, almost all 15 children shared how their parents didn’t give them their focus in what should be precious one-on-one time.

The children felt their parents’ lack of attention. None of them ever told their moms or dads that it upset them. All simply conformed to their parents’ norms and mirrored them by turning to their own electronic gadgets to fill the time (and the void).

As a little dose of etiquette penicillin to try and curb the spread of smartphone-itis, I wrote this post: What to Do When People Pay More Attention to Their Cellphones Than to You. You’ll enjoy it if you know anyone who has been inflicted with the dreaded cellphone disease.

They were alone together. That’s sad.

So what do we do at home, at work, and in our world at large to keep up with technology and to be purposely focused on those physically near us?

Well… first, we make ourselves aware that we might be adapting to a new norm of lack of focus on others without even being aware of it.

Next, we set down new social standards (etiquettes) for ourselves, our families, and our businesses, for interacting with technology so that we use it to connect with those near us, not disconnect from them. If you want to make sure you never hurt anyone unintentionally while using your phone, check out these posts I wrote: Your Savvy Guide to Smartphone Manners and How to Avoid the 7 Most Common Cellphone Sins.

As I sat down and wrote my list of texting etiquette, I quick-as-a-wink realized it was way too long for this post. There are whole books written on technology etiquette, including one I plan to write.

So here I offer my top seven tips for keeping up with the Joneses while texting without becoming “that guy,” the one who lets technology get in the way of his face-to-face interactions. 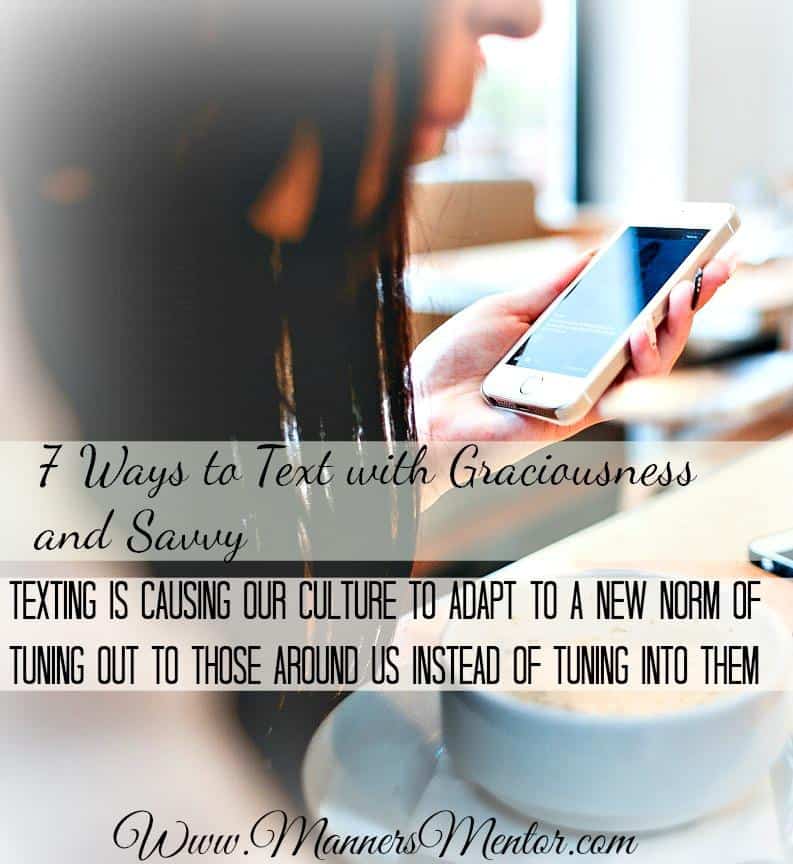 1. Think of texts as preludes or follow-ups to a conversation, not the conversation itself. Keep them short. More than 160 characters means that phoning or emailing is the better communication method.

2. It’s easy to misunderstand the tone of texts, even easier than emails. That’s why texts are best left for mundane messages like “I’m home safely!” and “See you at noon at home.”

3. Texting while you’re with others is as rude as walking away mid-sentence. Just don’t do it! Also, don’t text in movies, meetings, church, class, or while visiting others. Even if your friends have stepped out for a moment, or the event hasn’t started yet, be tuned in to where you are as soon as you enter the area, even during quiet moments and down time.

4. Texting is the most informal form of communicating. Usually, you don’t want to use texts to represent your business or organization or to relay important family news (unless everyone agrees in advance). Call or email instead.

5. Don’t use text lingo or shorthand unless you’re positive the recipient is fluent in texting’s constantly changing language. One unfortunate twenty-something wrongly assumed LOL meant Lots Of Love and was heartbroken and embarrassed to discover her texting friend was rudely saying Laughing Out Loud. He wasn’t sending his love at all.

6. Don’t leave them guessing. If recipients likely don’t have your cellphone number stored in their phone, identify yourself before composing the rest of your text: “Hi, Everly! This is Sarah (Kim’s mom from school)…”

7. Don’t send texts (or emails that go to smart phones) after bedtime. If recipients forget to set phones to silent before going to sleep (like my husband does!), you’ll wake people up at midnight when their phones beep with new messages.

8. OK, I know, I said “7 Tips,” but this one just has to be said again. Please, please, please, don’t ever send or read texts while driving! Maybe you haven’t hurt yourself or others yet, but this just could be the time! Don’t do it, ever! Ever. EVER.

Well, there it is. Like I said, it’s just a start! Now it’s your turn!

Help write the chapter on texting etiquette. Comment back and include what you want the world to consider about keeping others first while texting. Feel free to share your texting stories. They just might help someone shine when facing the same dilemma in the midst of their everyday encounters.

A McKee Update!Are you on Facebook? Come join me at there at Manners Mentor!

I appreciate each of you. I hope you know that, but just in case you don’t, consider yourselves much loved!