The number-one etiquette question people ask me is why no one will RSVP. It’s hard to plan an event when you don’t know how many people to plan for. Here’s how to get folks to follow RSVP etiquette. 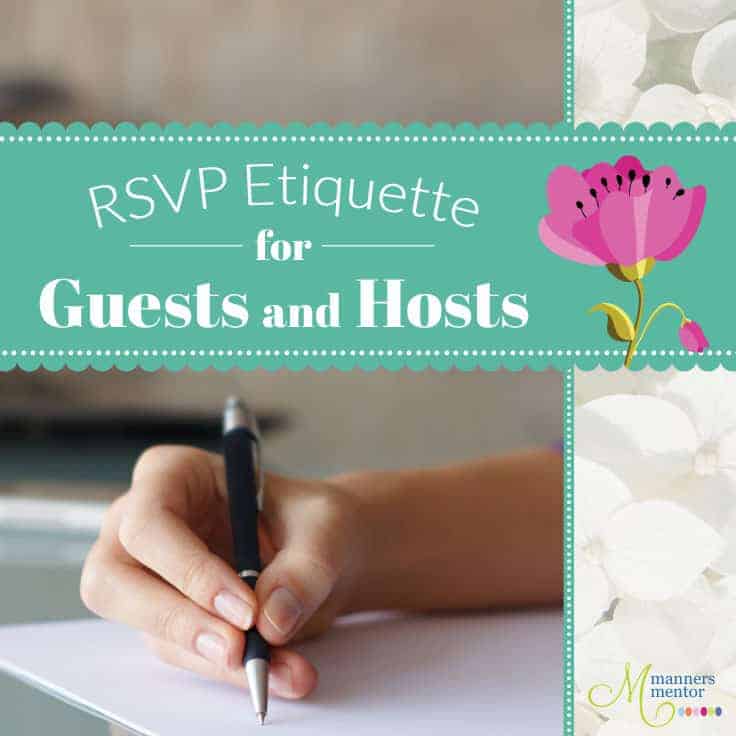 As always, thank you for being part of the Manners Mentor family! Today’s post is a Reader Q & A! Its topic is one we can all relate to because everyone seems to agree that it’s the number-one etiquette violation.

In fact, when I meet people, and they find out what line of work I’m in, they always want to talk about this topic first! It’s something that is so easy to do, yet no one seems to do it. The lack of it frustrates us, confounds us, and even makes us mad sometimes.

The odd thing is that everyone complains about it! A lot of us are annoyed that people don’t do it, yet we must not be showing them the love in reverse either.

Have you guessed what this violation of graciousness and consideration is?

Take a quick look at this reader’s letter about a party that she’s planning, and see whether you agree with her exasperation!

Why Doesn’t Anyone Seem to RSVP Anymore?

People who don’t respond to my invitations frustrate me. Am I missing something? Has the etiquette of RSVPs changed in the last few years? If so, what’s the etiquette? Should I write “Regrets only” on the invitation, or should guests call to let me know whether they’re coming either way?

There is one good thing about people not responding. My frustration has caused me to be much more aware of RSVPing to the invitations I receive!

I love your blog and hope that you’ll have time to answer my question.

I’m with you, Yolanda! People’s insensitivity to the efforts of someone extending hospitality to them is a top etiquette irk of mine. It’s also the number-one etiquette complaint that participants share with me during my seminars and consultations.

To try and help, I spent time writing everything I bet you and every host would like the guests they invite to events to know about RSVP etiquette, so the guests will understand their social duty to let hosts know whether they’re going to take part in the hospitality that you’re trying to offer them. It’s also so guests know how to show their appreciation for the invitation, or even how to bow out gracefully if the party is one they’d rather not attend.

RSVP Etiquette for Guests and Hosts

What Does RSVP Mean Exactly?

RSVP loosely translates from French as “Please Respond.” It’s an easy request. It just means that the hosts are asking us to let them know whether we’re coming to their party or event so that they can plan seating, food, and anything else they need to arrange for our needs and comfort.

How Quickly Should We RSVP?

Within 24 hours. Yep, just one day! The same day you receive the invitation is best.

A fast response signals that you’re excited to be included in the event!

Think of it like this. If I held up a $100 bill and asked whether you wanted it, I doubt you’d wait for two weeks (or forget entirely!) to let me know you wanted the money. Instead, you’d probably very quickly say something like, “Thanks, Maralee! You’re the best!”

That’s the same enthusiasm and quickness that is kindhearted to show when responding to invitations.

(While getting dressed for a party, if you ever wonder what you should wear, you’ll love this post because it’s a stylish go-to cheat sheet: Six Easy Tips to Know What to Wear. And if you want to know what time you should actually arrive — five minutes early to let the hosts know you made their event a priority vs. ten-or-so minutes late to give the hosts a few extra minutes to prepare — the answers are in this post: The Best Time to Arrive at Business and Social Events. Finally, once you’re at the soiree (or backyard barbecue) and you want to stand out for all the right reasons, here’s a post that will help you do just that: 7 Ways to Shine as A Party Guest.)

Can I Wait Until The “RSVP By” Date to Respond?

You can, but it’s kind of like showing up late for the party.

Did you know that, 50 years ago, no one put “RSVP” on invitations!

Why? Because it was considered really rude.

Rude?! Why Was It Once Rude to Ask People to RSVP?!

Asking people to RSVP meant that hosts didn’t trust that people would do the right thing on their own without a special request from them.

But times change and etiquette evolves to keep up with current sensibilities — and in this case, necessities. So sometime in the late 1960’s or early 1970’s, people started adding “RSVP” to their invitations as reminders because people had started not responding.

Things in RSVP world have slid further downhill, and now most requests list an “RSVP by” date because people are slow to (or just don’t) RSVP.

Please respond a long time before the date. Not doing so sends a signal that you’re waiting to make up your mind because the event doesn’t thrill you on first thought!

What If You Don’t Know Whether Your Schedule is Going to Allow You to Attend?

Go ahead and call the host to acknowledge the invitation the day you receive it. Then ask whether it would be an imposition if you waited to respond until you know your schedule. If you can explain what the event is that you’re waiting to hear about, go ahead and let the host know. “My sister is flying in some time that week for a visit, and I don’t know the dates for sure. As soon as she books her flight, I’ll let you know.” If it’s personal, you don’t need to mention it.

Do I Have to Respond to Every Invitation? What About Parties at People’s Homes Where I’m Suppose to Buy Something?

Yes, even sales parties should receive your RSVP within 24 hours. Typically, sales solicitations don’t need to be responded to, but since this one is being hosted by someone you know, it’s gracious to let her know whether she should set out a chair, provide refreshments, and do things just for you! It’s also very helpful to the person selling the product to know how many catalogs, samples, and such to bring to the party.

But, Maralee, If I RSVP That I’m Not Coming, the Host Will Beg, and Then I’ll Feel Awkward!

For the guest: Oh, I’ve so been there with you! It’s the worst, isn’t it? Your best bet is to RSVP via email. It’s harder to beg in an email than a phone call or even a text. The hostess will have to type a lot, which takes effort. 🙂 And if she does contact you to follow up, tell her that you appreciate the invitation, but there isn’t room in your budget for buying (fill in the blank), and you don’t want to give in to temptation!

If she asks you just to attend to be in the room so the two of you can catch up, let her know that you appreciate the offer, and you’d like to catch up with her when it’s just the two of you. While you’re on the phone, go ahead and set the date, so it’s not one of those “Let’s do lunch!” type brush-offs.

For the Hostess: Oh, I’ve been there with you, too! I’ve held parties where I’ve invited twenty-five or more people, but only three or four showed up. It’s embarrassing, so we do tend to try “harder” to get guests to attend than maybe we normally would. But we don’t want to strong-arm our friends, no matter how great the product is.

So if people are kind enough to RSVP and their answer is no, accept it without questioning the reason or asking whether they won’t reconsider. And don’t feel bad about small numbers at parties. For sell-at-home companies, the average number of people at a party is six. Ten is considered significant. Twenty is enormous. It’s the same for almost all sell-at-home companies. So there’s no reason to feel sorry if four of your friends show up. It can still be a fantastic party!

What About Writing “Regrets Only” On Invitations?

People are no better at telling you they’re not attending than they are at letting you know they’re planning to join you. So you won’t get a better count asking for “Regrets Only.”

“Regrets Only” is reserved for huge invitation lists (fundraisers, events hosted by large corporations, and such), where one person would be overwhelmed by the amount of correspondence it would take to keep track of who is and isn’t coming. For events with fewer than 250-500 attendees, the standard RSVP applies.

What’s The Etiquette Of Contacting People Who Don’t RSVP?

As the date approaches, and you need to know how many people to plan for, it’s fine to reach out to your guests who didn’t RSVP! Script your conversation/voice mail/text as something like this: “Debbie, I’m making the final arrangements for dinner on the 27th. I hope you and Doug received the invitation we sent you about two weeks ago and that you’ll be able to join us. Please let me know today whether you can.” When you say it nicely, the other person shouldn’t be offended; after all, you’re trying to prepare things for them. You’ll also more than likely get your reply — and the opportunity to share a subtle reminder of the social contract between a host and a guest.

When a friend RSVPs and shares that she can’t attend, bite your tongue to avoid asking her why. There could be a million reasons, and half a million of them she might not want to share! Asking why might seem like you’re showing concern, but by doing so, you could put her in the position of feeling like she needs to tell a white lie.

If your friend says she can’t attend and doesn’t offer an explanation, the most gracious thing is to say, “You’ll be missed!”

Now, for those of you who pick up the phone to RSVP before the invitation ever touches the kitchen counter, you’re part of the Manners Mentor Movement!

For all the rest of us, let’s make it our goal to call the same day! Our timely response is our outward expression of our inward consideration!

We’ve so got this now!